Hiroshima and Nagasaki: Photos From the Ruins

One scene shared by all of the 20th century’s bloodiest conflicts might have been lifted straight from The Road Warrior, or a Beckett play: spectral landscape; buildings obliterated; blasted trees; lifeless wasteland. The photographs in this gallery, for instance pictures that starkly reference every bleak, war-battered panorama from Gettysburg to Verdun to Stalingrad to Chosin Reservoir to Pork Chop Hill were made in September, 1945, in Hiroshima and Nagasaki, Japan.

But far from chronicling the aftermath of a sustained, slogging campaign, these pictures none of which were published in LIFE magazine depict the devastation produced in a few unspeakably violent seconds. Here, LIFE.com presents pictures from both cities taken in the weeks and months following the bombings bombings that killed a combined 120,000 people outright, and tens of thousands more through injury and radiation sickness. Included, as well, are scans of typed memos from photographer Bernard Hoffman quietly revelatory notes like the one he wrote on September 3, 1945, to LIFE’s long-time picture editor, Wilson Hicks:

We saw Hiroshima today or what little is left of it. We were so shocked with what we saw that most of us felt like weeping; not out of sympathy for the Japs but because we were revolted by this new and terrible form of destruction. Compared to Hiroshima, Berlin, Hamburg and Cologne are practically untouched . . . The sickly sweet smell of death is everywhere.

The reasons most of these and many more pictures by LIFE photographers on the ground in both Hiroshima and Nagasaki were never published have largely been lost or simply forgotten over the intervening seven decades. Perhaps a family album (see slide #4) too-readily humanized an enemy that had been so effectively demonized and dehumanized for four long, brutal years. (Of that image, photographer Bernard Hoffman wrote to LIFE’s long-time photo editor, Wilson Hicks, on September 9, 1945: “Assume this had been a private dwelling. The album was water soaked and some of the pix stuck together. . . . However, since this album came through the blast intact, and remains the only evidence of what once had been a home and family, I’m sending the pictures on for what they’re worth to you.”)

Or maybe a specific picture didn’t make it into LIFE because it too-closely resembled another image that had run in an issue of the magazine a week, or a month, before.

The fact of the matter is, as with almost all of the photographs from the vast LIFE archives that never made it into the pages of the magazine, we’ll likely never know why the remarkable pictures here went unpublished for so long.

Finally, below are excerpts from various issues of LIFE published after the war that convey the powerful, discordant reactions relief, horror, pride, fear that the bombings, and the long-sought victory over Japan, unleashed. Today, when America and Japan are, for the most part, staunch allies, trading partners and avid fans of one another’s goods, foods and popular culture, the words and sentiments below are a vivid reminder that the Second World War is history bloody, complicated, indelible history.

“In the following waves [after the initial blast] people’s bodies were terribly squeezed, then their internal organs ruptured. Then the blast blew the broken bodies at 500 to 1,000 miles per hour through the flaming, rubble-filled air. Practically everybody within a radius of 6,500 feet was killed or seriously injured and all buildings crushed or disemboweled.” From the article “Atom Bomb Effects,” LIFE magazine, 3/11/1946

“Japan’s premier, Prince Higashi-Kuni . . . on September 5 paid despairing tribute to the atomic bomb: ‘This terrific weapon was likely to result in the obliteration of the Japanese people.’ The atomic bomb, he indicated, was the immediate inducement to surrender. . . .” From “What Ended the War,” LIFE magazine, 9/17/1945

“A crewman met us at the door, a big smile on his face. ‘The strike report is in,’ he said. ‘They dropped it on Nagasaki.’ The colonel was surprised. ‘That was the third target,’ he said. Inside the hut everybody was cheerful. The men felt Sweeney [Major Charles W. Sweeney, who commanded the B-29 bomber, Bockscar] would reach Okinawa from Nagasaki, or at least ditch in the sea near there and get picked up by a Navy rescue plane. We heard later that Sweeney reached Okinawa with ‘enough gas to fill a cigarette lighter.'” From “The Week the War Ended,” LIFE magazine, 7/17/1950, by reporter Robert Schwartz

“Japanese doctors said that those who had been killed by the blast itself died instantly. But presently, according to these doctors, those who had suffered only small burns found their appetite failing, their hair falling out, their gums bleeding. They developed temperatures of 104, vomited blood, and died. It was discovered that they had lost 86 percent of their white blood corpuscles. Last week the Japanese announced that the count of Hiroshima’s dead had risen to 125,000.” From the article “What Ended the War,” LIFE magazine, 9/17/1945

“I never heard an enlisted man in the 509th use the words ‘atom bomb’ or ‘atomic bomb’ or ‘A-bomb.’ Everyone in the squadron called it ‘The Gimmick.’ During the months of their secret work they had to have a name for the vague something that they were supposed to be working on, and when somebody referred to it as ‘The Gimmick’ that name stuck.” From the article, “The Week the War Ended,” LIFE magazine, 7/17/1950

“When the [Nagasaki] bomb went off, a flier on another mission 250 miles away saw a huge ball of fiery yellow erupt. Others, nearer at hand, saw a big mushroom of dust and smoke billow darkly up to 20,000 feet, and then the same detached floating head as at Hiroshima. Twelve hours later Nagasaki was a mass of flame, palled by acrid smoke, its pyre still visible to pilots 200 miles away. The bombers reported that black smoke had shot up like a tremendous, ugly waterspout. With grim satisfaction, [physicists] declared that the ‘improved’ second atomic bomb had already made the first one obsolete.” From the article, “War’s Ending,” LIFE magazine, 8/20/1945

Liz Ronk, who edited this gallery, is the Photo Editor for LIFE.com. Follow her on Twitter at @LizabethRonk. 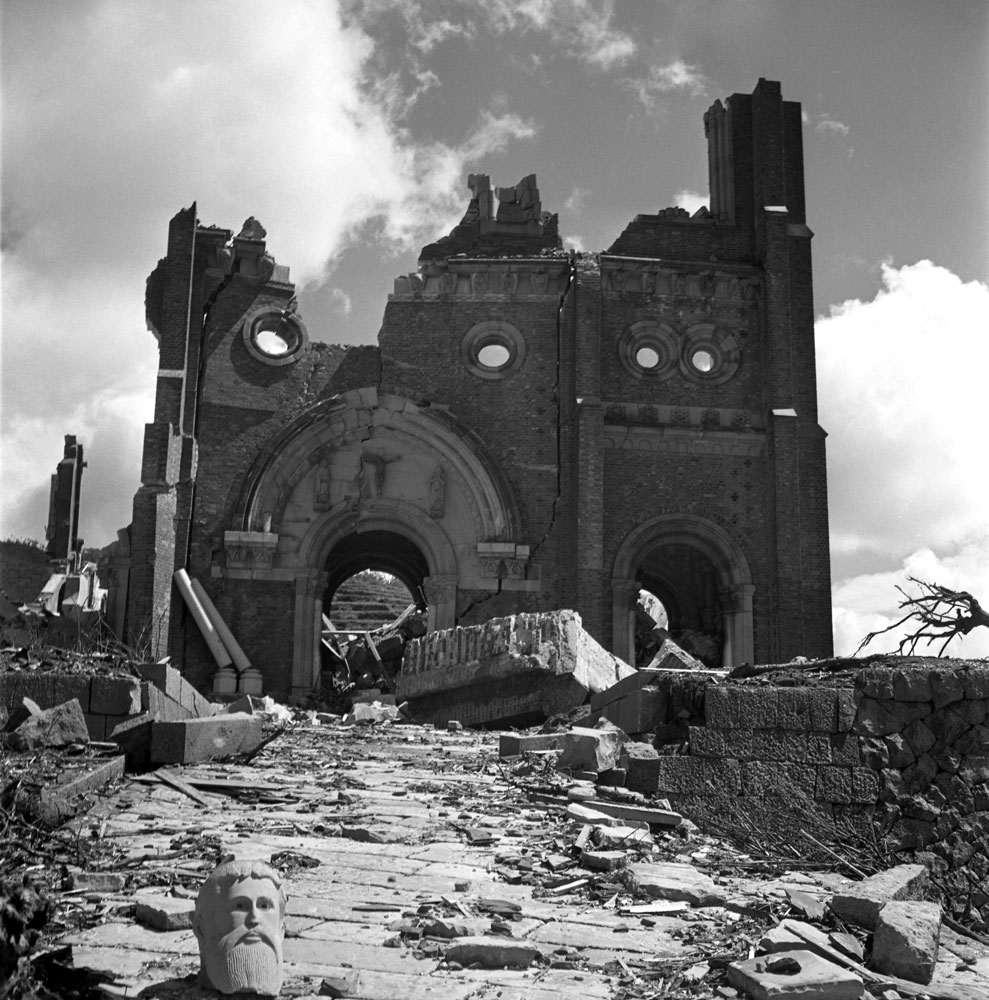 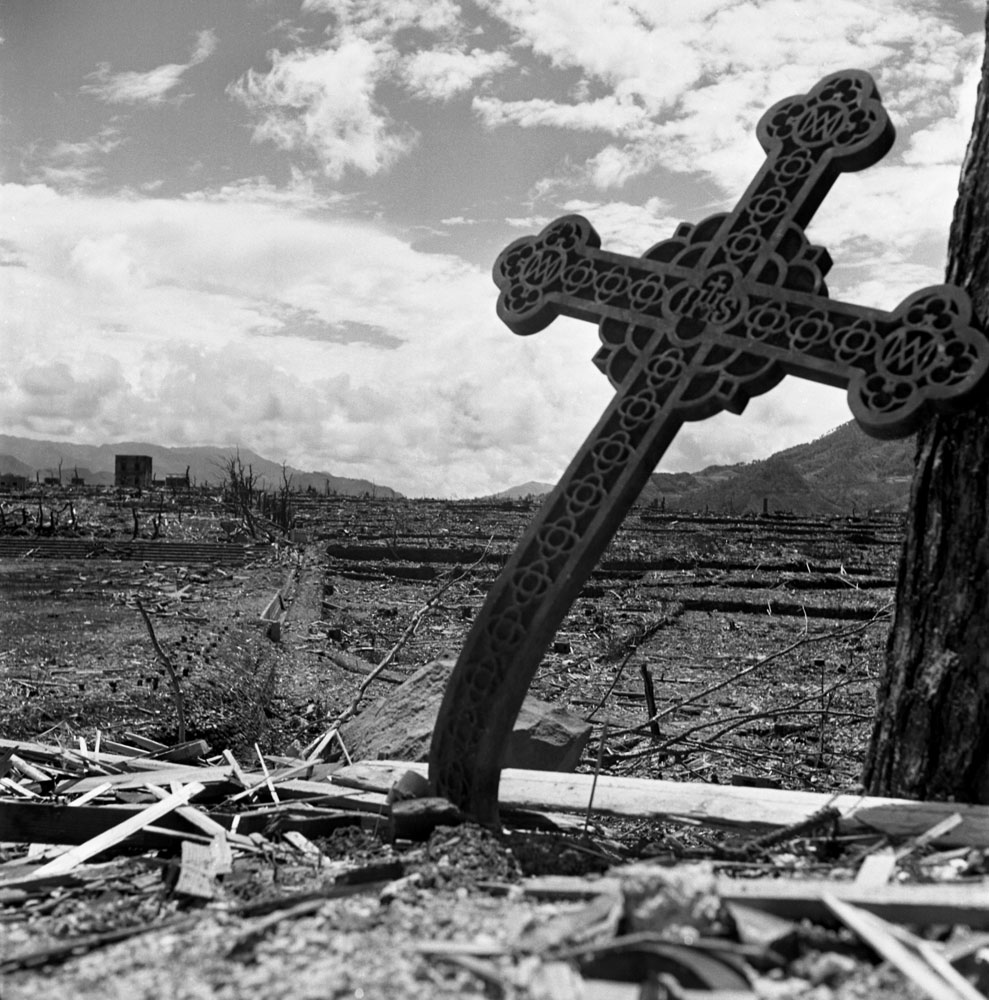 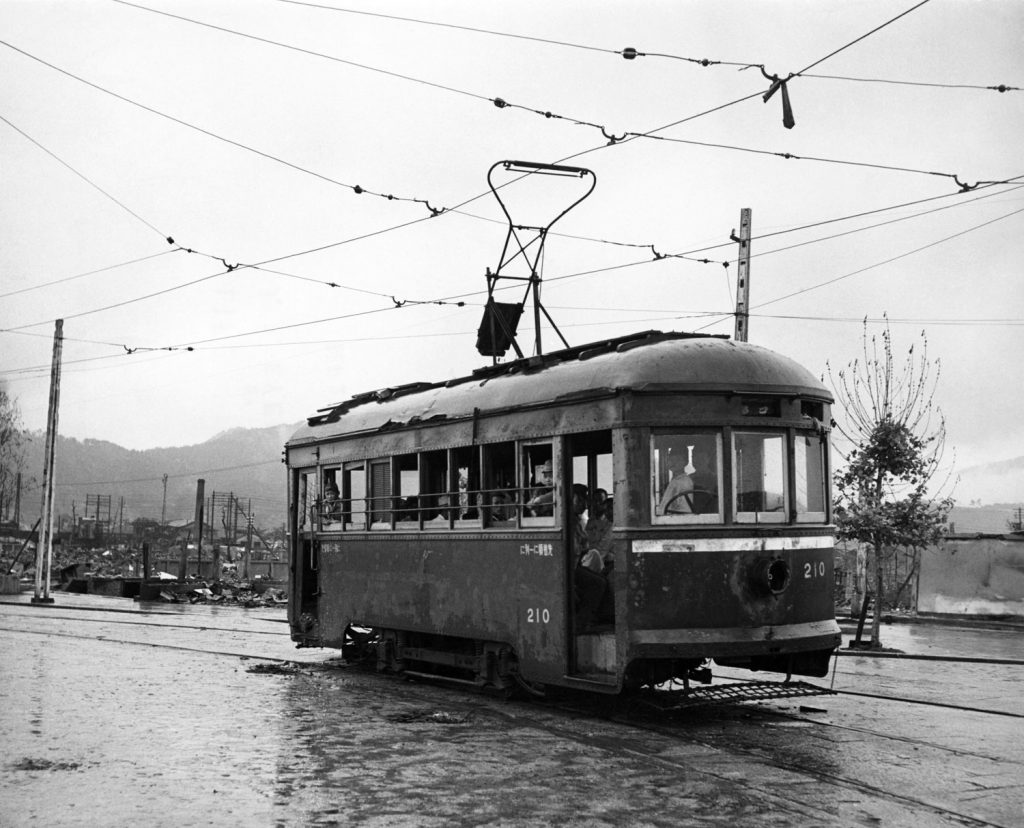 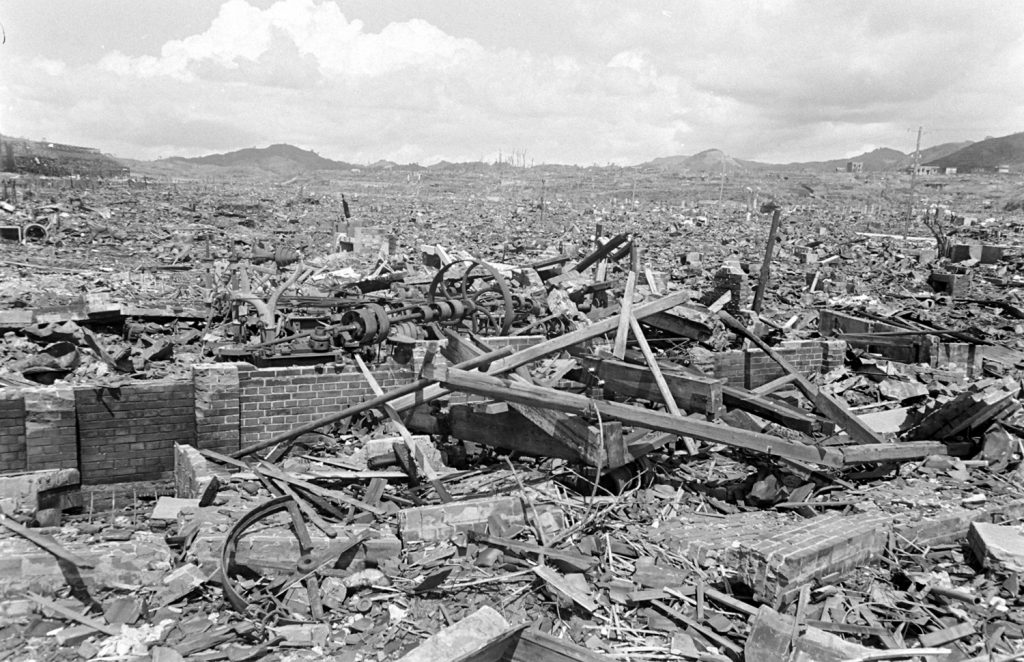 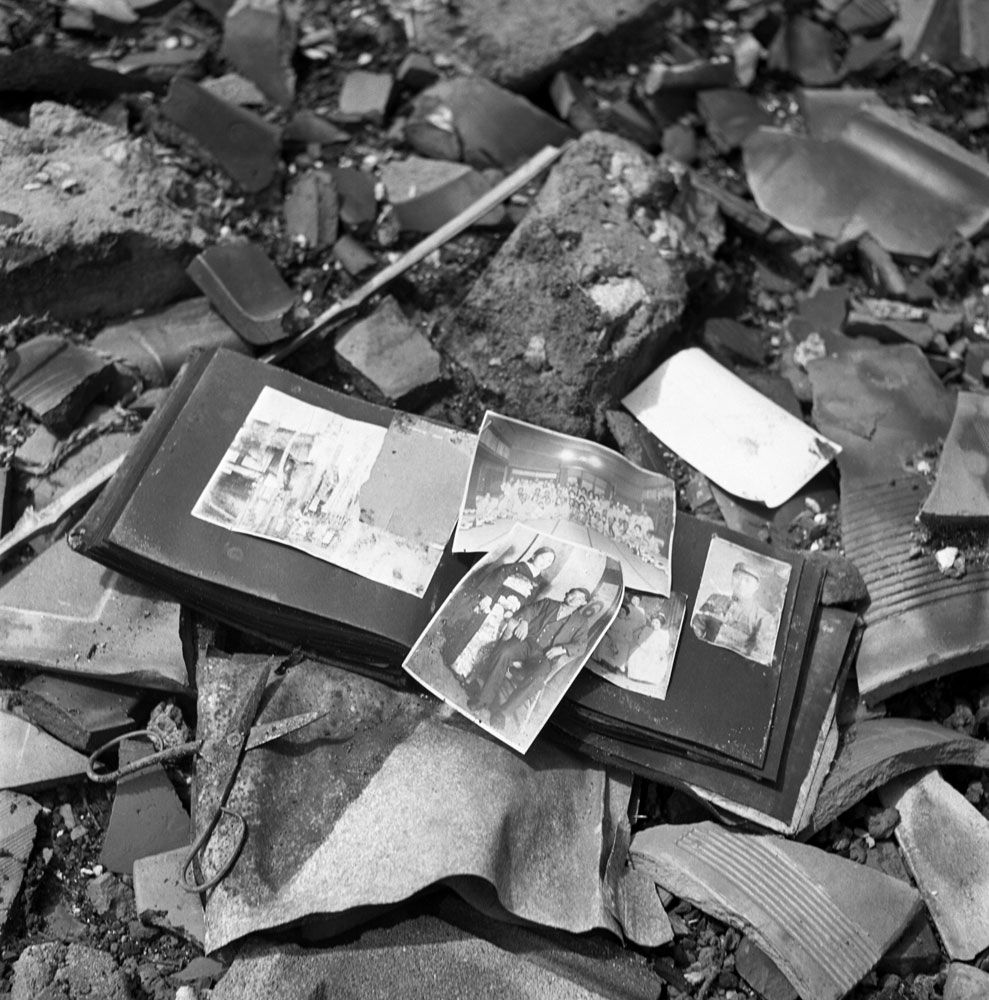 A photo album, pieces of pottery, a pair of scissors – shards of life strewn on the ground in Nagasaki, 1945. 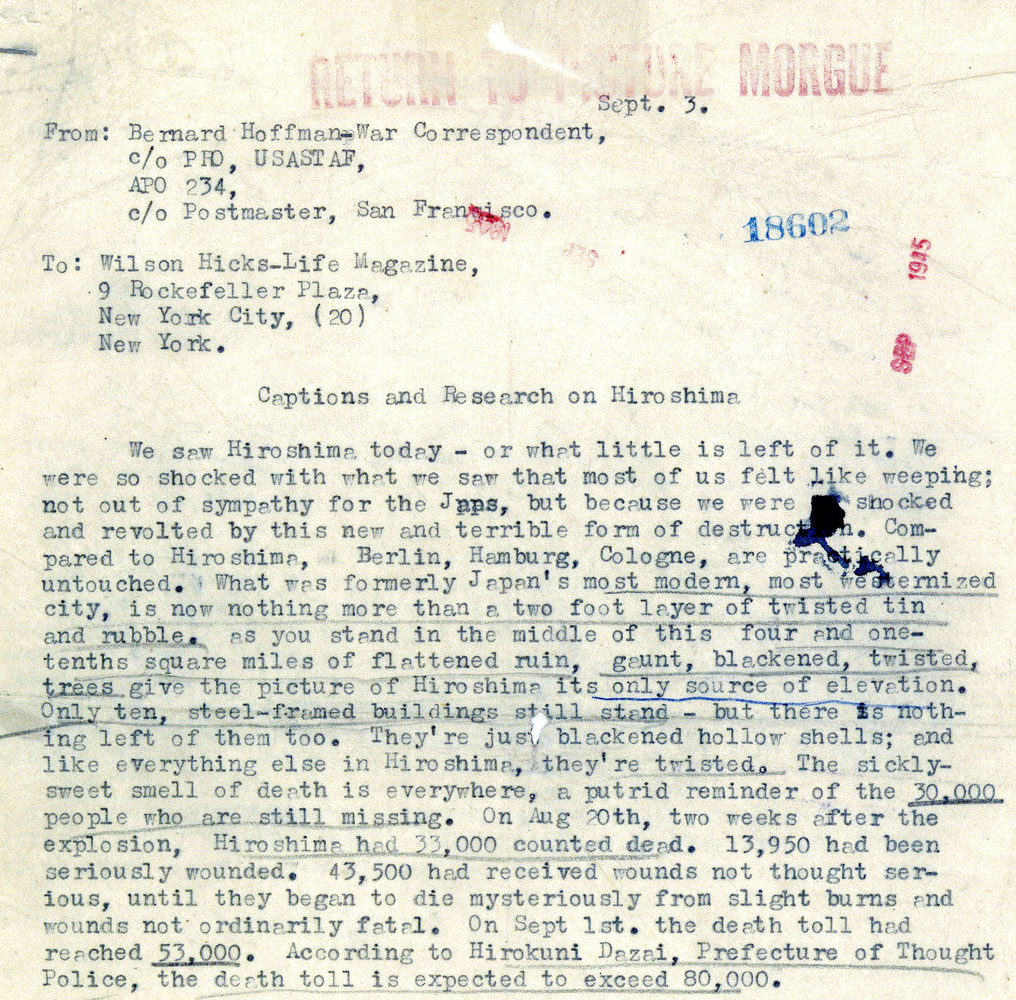 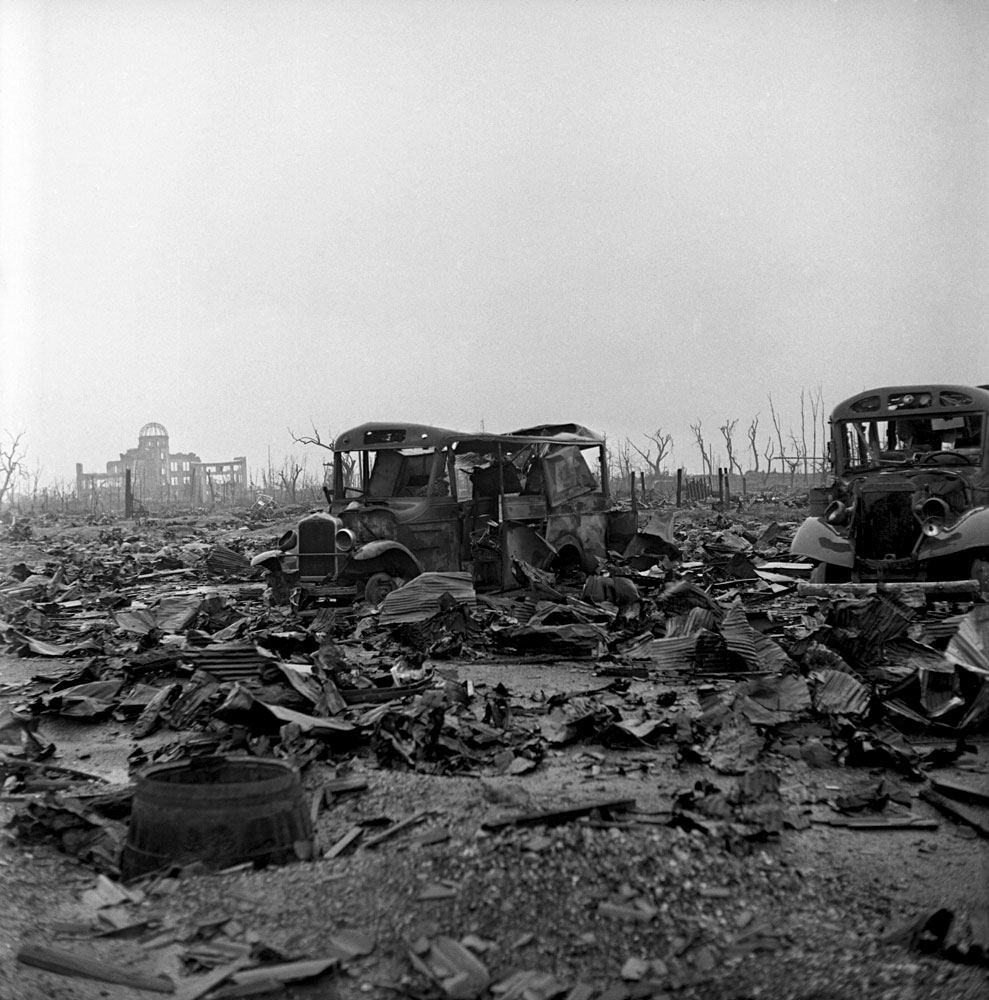 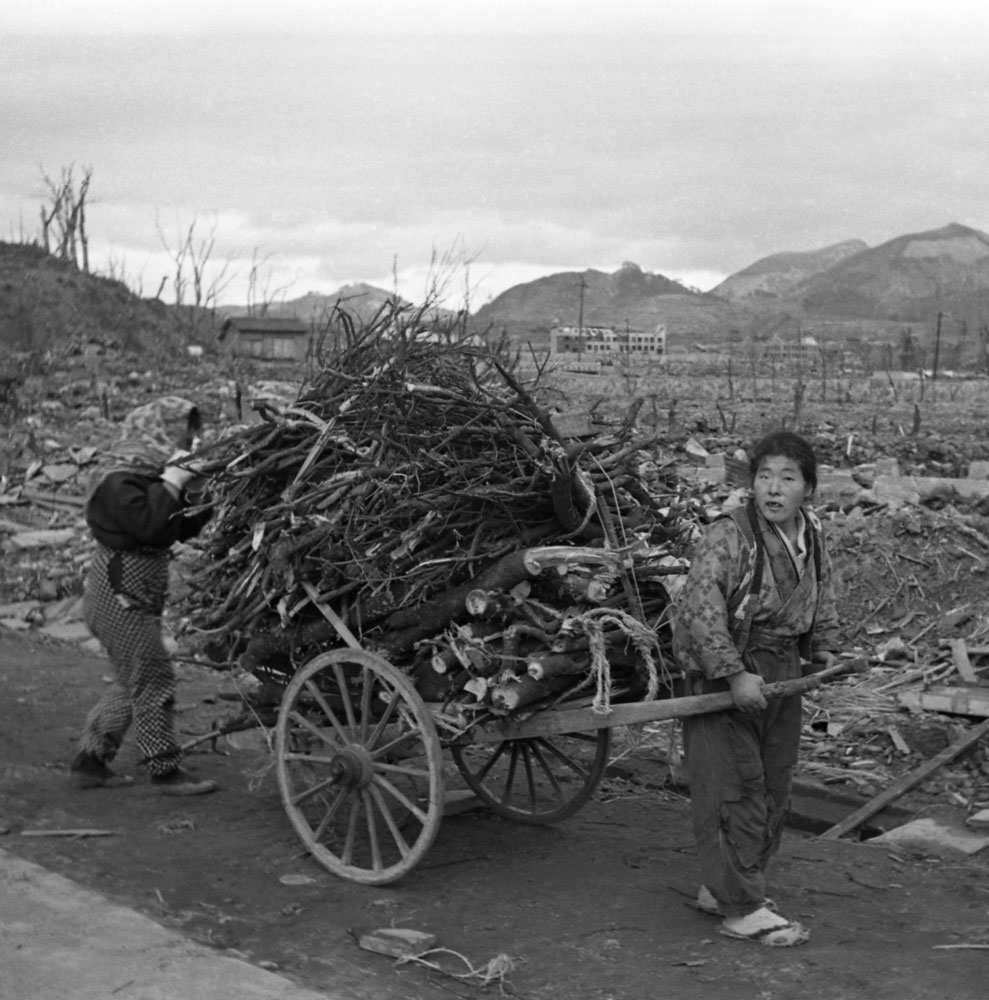 Nagasaki, 1945, a few months after an American B-29 dropped an atomic bomb, codenamed “Fat Man,” on the city. 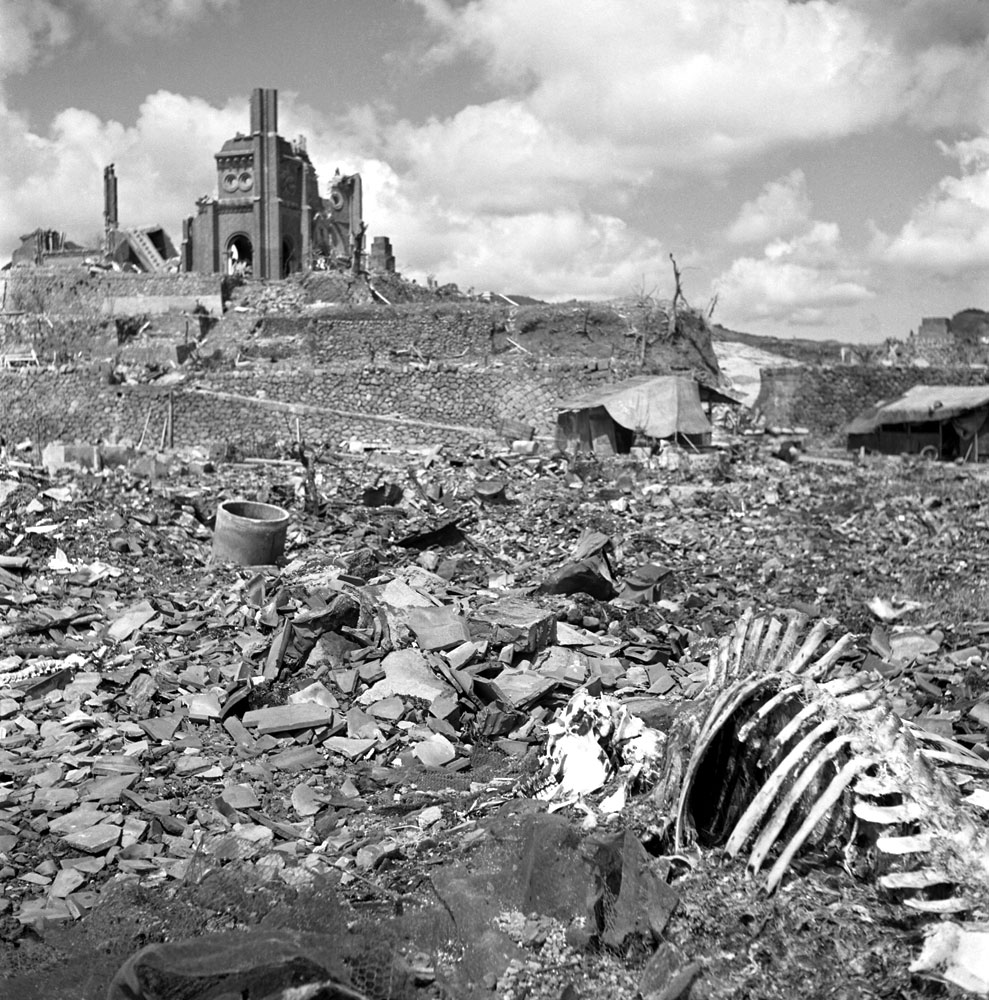 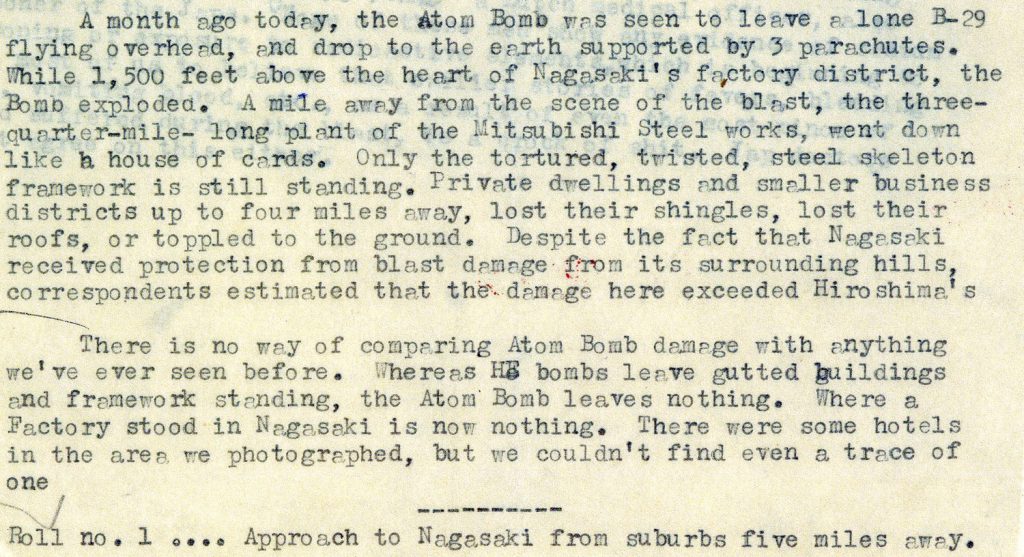 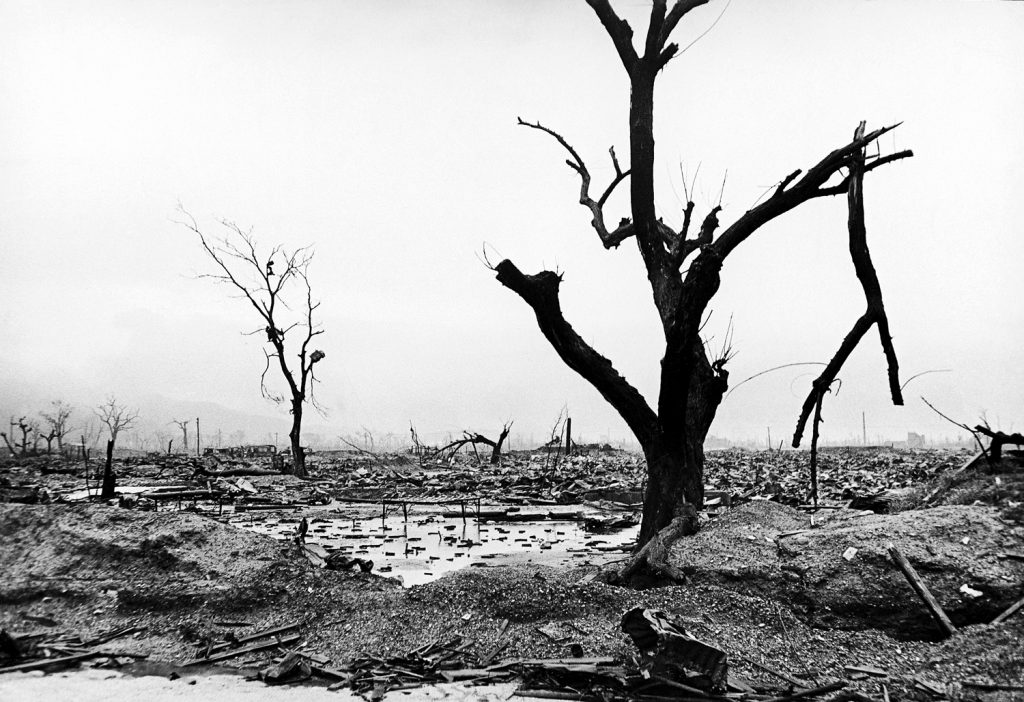 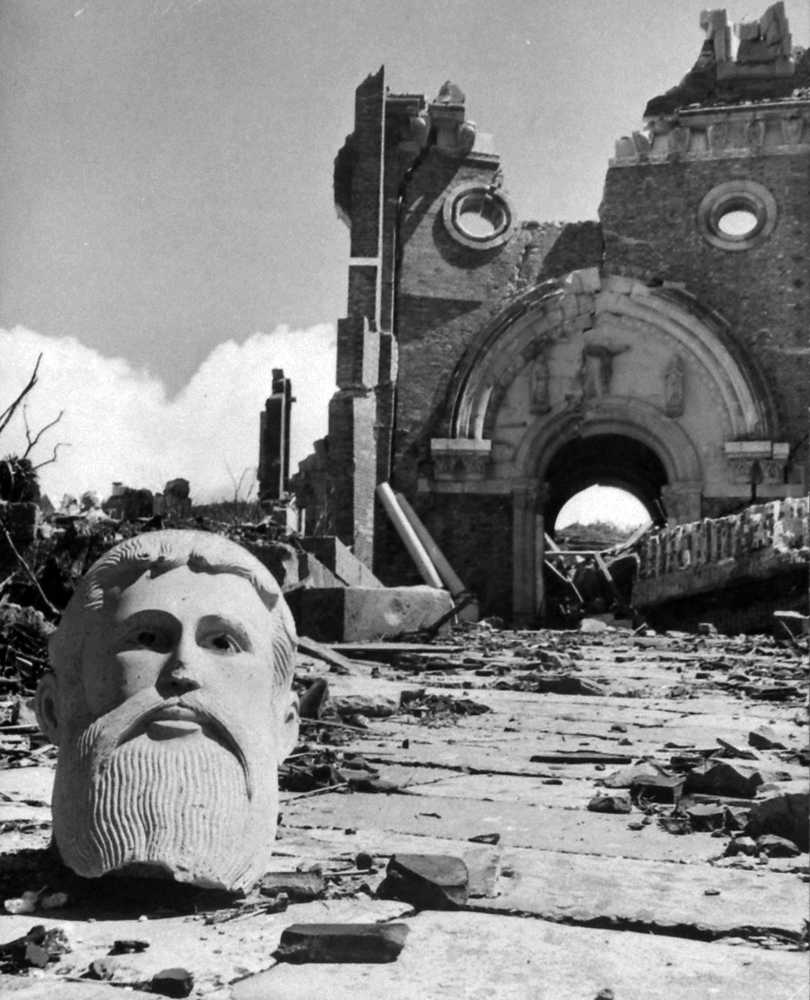 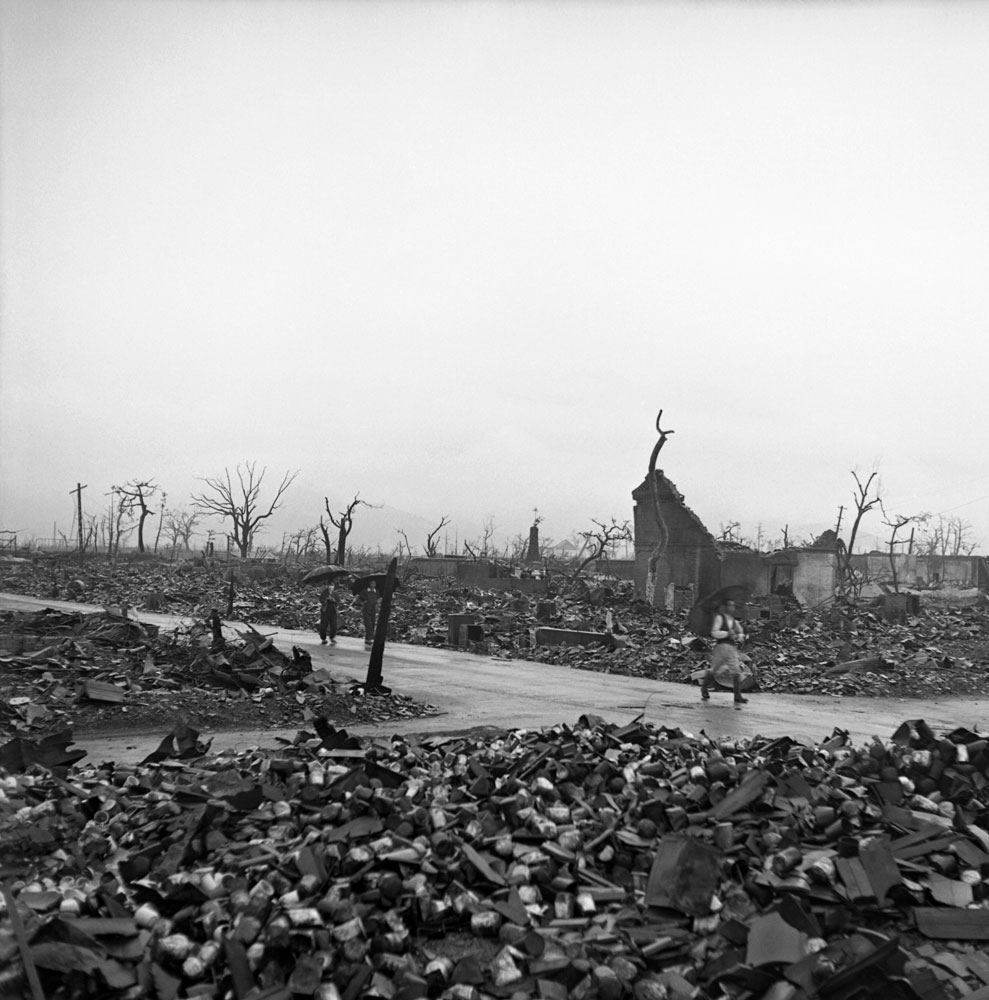 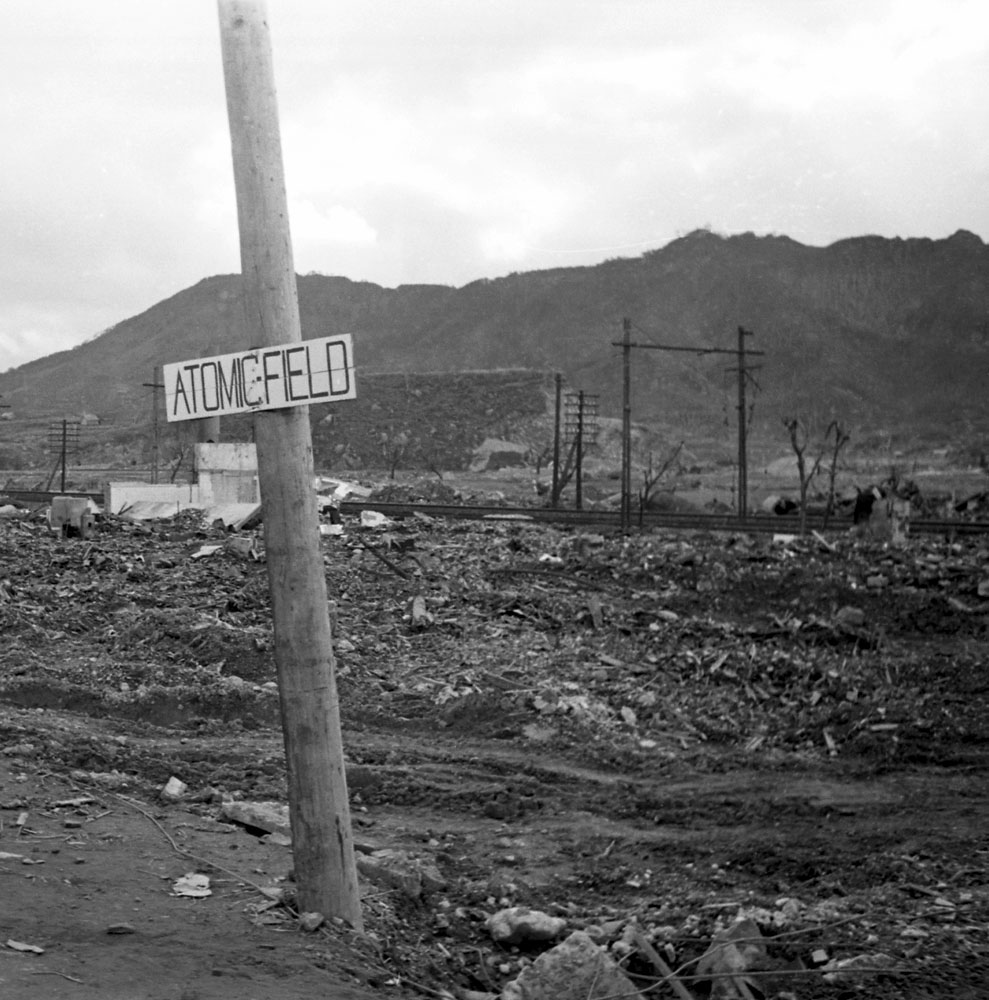 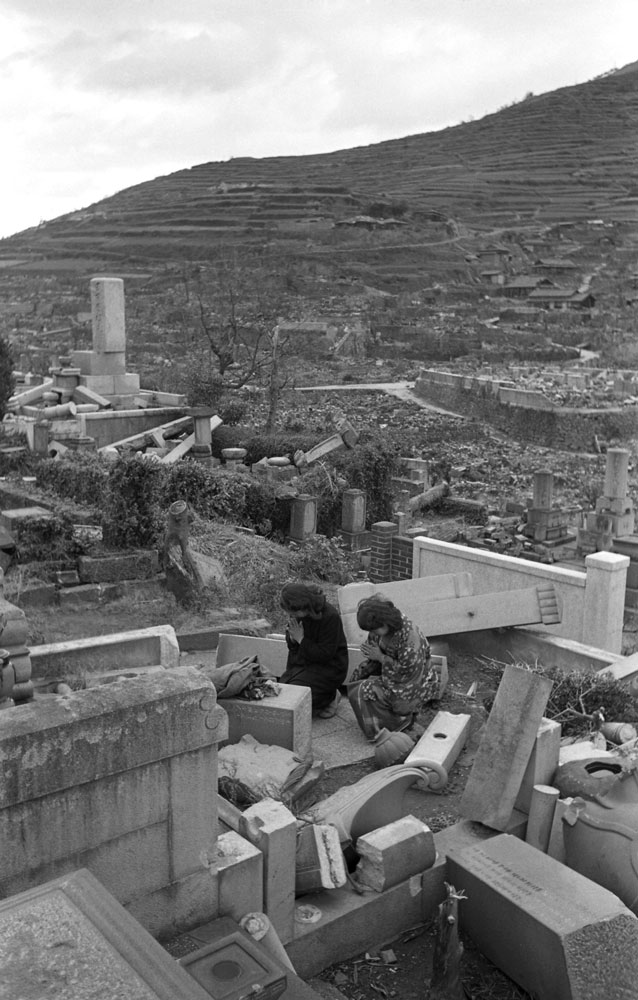 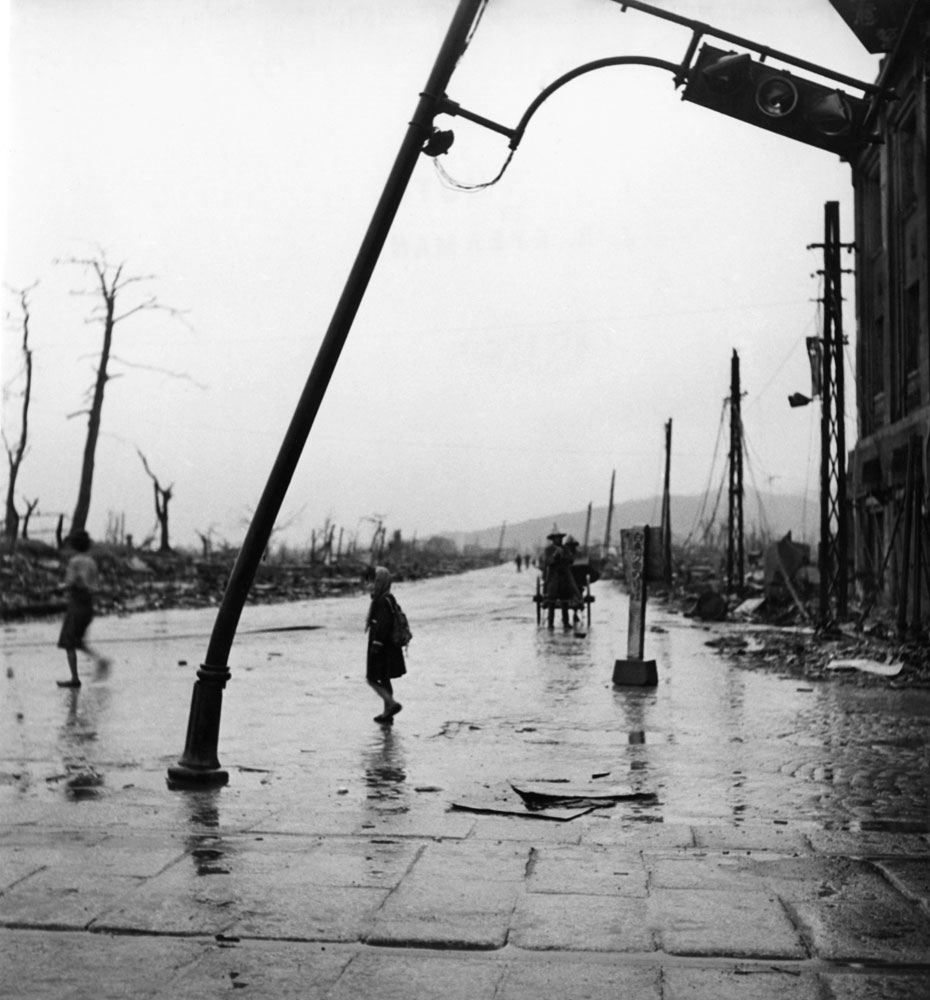